Cohen, serving a three year sentence, was imprisoned for lying to Congress.

He was released from prison in May 2020 amid concerns over Coronavirus but returned to prison in early July after tweeting about plans to publish his book.

His book is expected to be published in full in September after the US justice department dropped a gag order restraining the book’s publication. 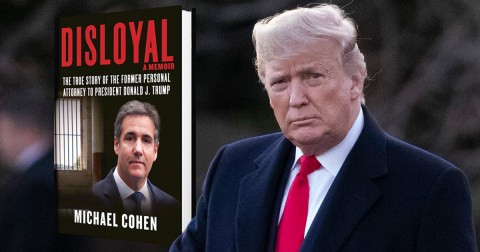 In excerpts of the book released on Friday August 14, Cohen claims he helped the president commit tax fraud, created a secret back channel to Vladimir Putin, covered up affairs of the president and witnessed a ‘golden showers’ incident at a sex club in Las Vegas.

He said the book will be based on personal anecdotes and ‘documentary evidence.’
According to Cohen, he speaks from a position of knowledge, saying that for 10 years, he was Trump’s last call at night and first in the morning and that he was ‘in and out’ of Trump’s office ’50 times a day.’

He also claims Trump tried to ‘insinuate’ himself in Vladmir Putin’s world and his ‘coterie of corrupt billionaire oligarchs.’
‘I know where the skeletons are buried because I was the one who buried them,’ Cohen wrote in the foreword, which was published on a website for his tell-all book ‘Disloyal: A Memoir. The true story of the former personal attorney to President Donald J. Trump.’ 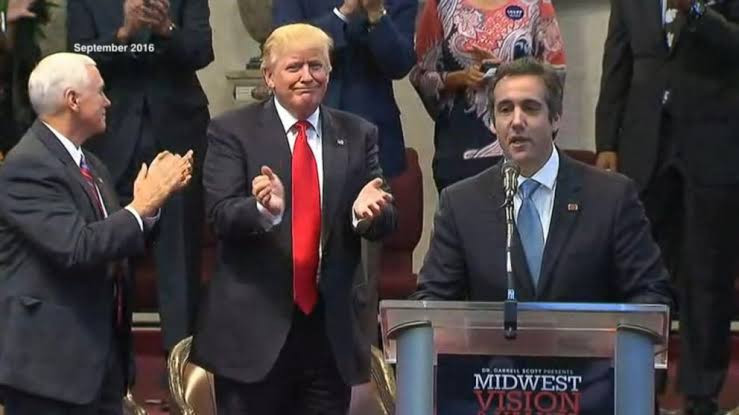 ‘In some ways, I knew him better than even his family did because I bore witness to the real man, in strip clubs, shady business meetings, and in the unguarded moments when he revealed who he really was: a cheat, a liar, a fraud, a bully, a racist, a predator, a con man,’ Cohen said.
He said he was a ‘demented follower’ who acted as Trump’s bully, fixer and designated thug.

‘I stiffed contractors on his behalf, ripped off his business partners, lied to his wife Melania to hide his sexual infidelities, and bullied and screamed at anyone who threatened Trump’s path to power,’ Cohen wrote.

‘From golden showers in a sex club in Vegas, to tax fraud, to deals with corrupt officials from the former Soviet Union, to catch and kill conspiracies to silence Trump’s clandestine lovers, I wasn’t just a witness to the president’s rise—I was an active and eager participant.’

Cohen also spoke about the investigation by former special counsel Robert Mueller into Russia’s interference in the 2016 election and his role on the Trump Tower Moscow project.

In his book he claims Trump ‘cheated’ in the election with ‘Russian connivance’, though he does not say how.
Cohen says: ‘Trump had colluded with the Russians, but not in the sophisticated ways imagined by his detractors.

‘I also knew that the [Robert] Mueller investigation was not a witch-hunt. Trump had cheated in the election, with Russian connivance, as you will discover in these pages, because doing anything -and I mean anything – to “win” has always been his business model and way of life.’

Cohen also said that the book will show the President’s behaviour behind closed doors’, including Trump’s ‘pointedly racist remarks against such Black leaders as President Barack Obama and Nelson Mandela, neither of whom he viewed as real leaders or as worthy of respect by virtue of their race’.

‘Our cell phones had the same address books, our contacts so entwined, overlapping and intimate that part of my job was to deal with the endless queries and requests, however large or small, from Trump’s countless rich and famous acquaintances,’ he writes.

He also said he feared he would be killed by Trump’s supporters when he gave evidence to Congress after flipping and co-operating with Mueller.

‘The President of the United States wanted me dead,’ he writes, describing Trump as a ‘mob boss’ who would never directly order a hit but instead spoke in a way ‘carefully calibrated to convey his desires and demands’.