The White House and US State Department have announced that starting today, Friday January 24th, it will stop pregnant foreigners from travelling into the country to give birth to children in order to obtain American citizenship, a practice known as ‘Birth Tourism’.
The new rules were sent from the US State Department to embassies around the world.

The White House announcing the new rule Thursday evening said that the State Department “will no longer issue temporary visitor (B-1/B-2) visas to aliens seeking to enter the United States for ‘birth tourism.'” 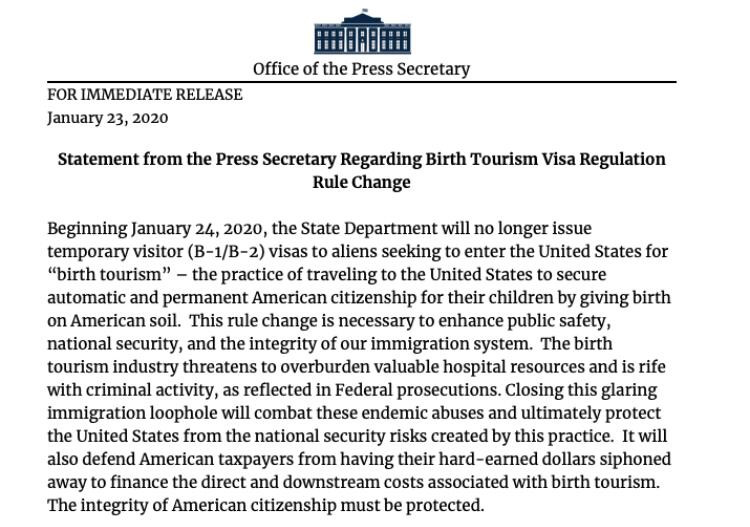 The White House statement said the rule change was “necessary to enhance public safety, national security, and the integrity of our immigration system,”

According to the new rule, foreigners will be denied temporary visas if their plan is to give birth in the US but the rule doesn’t apply to the 39 countries mostly in Europe that have the Visa waiver program.
‘Visitors to the US will be denied temporary visas if it’s found that the primary purpose of travel is for obtaining US citizenship for a child by giving birth in the United States’ a new State Department communique read.
According to a cable sent from the US department to CNN, consular officers can’t directly ask a woman if they are pregnant unless they have a specific reason to believe she was pregnant.
“You must not ask a visa applicant whether they are pregnant unless you have a specific articulable reason to believe they may be pregnant and planning to give birth in the United States. You should document any such reason in your case notes,” reads the cable.
“You must not, as a matter of course, ask all female applicants (or any specific sub-sets of applicants) whether they are pregnant or intend to become pregnant.”
Facebook
Twitter
Pinterest
LinkedIn