The bail of Derek Chauvin, the white police officer charged with murder in the killing of George Floyd two weeks ago, has been increased from $500,000 to $1.25 million on Monday afternoon.
Chauvin, a 19-year veteran of the police force has been behind bars since he was arrested on May 29 following Floyd’s death that has sparked protests of racial inequality all over the world.
Chauvin faces charges of second-degree manslaughter and second-degree murder, and participated in his initial court hearing at the heavily fortified Hennepin County courthouse on a video feed from jail.
Mr. Chauvin, who placed his knee on the neck of Mr. Floyd for nearly nine minutes in a video showing Floyd’s killing could face up to 40 years in prison. and is referred to as the most hated man in the world.
The bail set for Mr. Chauvin is higher than the bail of at least $750,000 given last week to the other three rookie officers accused of aiding and abetting in Mr. Floyd’s death. All four men were fired the day after Mr. Floyd died. 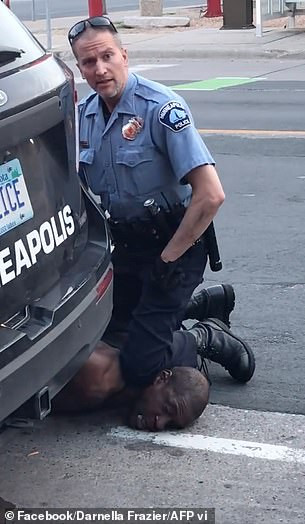 On that evening of May 25, Mr. Floyd, sitting in a nearby car, stiffened when the officers tried to put him in the back of their police car after getting a call from a nearby store alleging Floyd had used a counterfeit $20 bill.Floyd fell to the ground, according to an arrest affidavit. Then Chauvin knelt on Floyd’s neck.
Mr. Floyd struggled as the rookie officers held Mr. Floyd’s back and legs, and began saying he could not breathe, the affidavit says.Chauvin held his left knee on Mr. Floyd’s neck for over nine minutes, while Mr. Floyd still said “I can’t breathe” and “Mama” and then, after a time, stopped talking as he became unconscious. By the time he was taken to hospital he was pronounced dead.
Facebook
Twitter
Pinterest
LinkedIn